I never thought of an elephant playing a part on my website. And now he made it as a logo into my business.

It’s December of 1990. A cold day with snow in the air in Cincinnati, OH.  A Friday, a week before Christmas. I left the hospital early to cook dinner for us. The first evening at home since Sarina was born as a micro-preemie in August.

I opened the mailbox on my way in and received a 9×12 white envelope with a sender from Germany I did not know.

I sat down to open it. A business friend of my husband had sent his Christmas greetings. My heart still beats stronger when it remembers what I was about to read.

In my hands, I had a picture of a little elephant on a tightrope.

The other page offered a poem called:

​I looked at the picture first.

A tightrope is spanning across a night sky. Red, yellow and blue stars dancing around a little elephant. He is balancing on that rope. One leg just lifted to make the next step. A smile on his face, he looks so confident, delighted.  His trunk is reaching for a yellow star. A little bow around his neck is looping up into the sky. I follow that loop and there, all the way up to the right my eyes catch a little angel floating in the sky.

He is holding the loop. He too has a gentle smile.

I’m stunned. Speechless. My eyes fill with tears. Can that be? I breathe. I still remember the silence I felt. All the fatigue and pain in my body seemed to disappear. Curious,  I wiped the tears and started to read. Word by word it’s imprinting itself into my heart.

The way the poem rhymes is very beautiful. I held my breath reading it.
I try to get as close as possible in my translation:
🇺🇸Dream Dancer

“Highly concentrated, his gaze awake, the Big One acts he is tiny“

“To walk on such a tiny rope is nothing but too dangerous. In fear, we ask:  Will he tip? Or will he not?“
…and it tells about what bliss it would be if he can make it.

“Stunned and worried the audience is following his wire act. For if he falls, disaster is a fact.“

“Yet why so anxious, why giving up? Why don’t we let his courage inspire our trust? Can’t we see in front of us that he is held and that he trusts?“

… the poem is now asking us

“to feel assured”
…that if we step on new even dangerous terrain, that we are not alone, that someone is holding us.

“In spite of dashing balances, we can last through all the challenges.”
​Now I’m sitting in yet deeper silence and, the picture of my baby fighting for her life is merging with the little elephant in front of me. All I can do is cry. Cry hard. And now look: 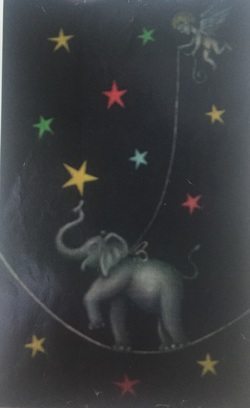 I thought about my baby in the NICU. NICU – another word forever imprinted, carved, and forced into my life. Like blood gas, respirator, incubator, breathing- and feeding tubes.

Our daughter Sarina was born in August that year. Four months early, at twenty-four weeks gestation. Without a heartbeat.  She was ripped out of the safety of my womb, no lungs, no eyesight yet. Only weighing 1’ and 15“ she barely had a chance to live.

At the time the Dream Dancer came into my life she had just self-extubated from the respirator. She had pulled out her breathing tube three times before but couldn’t make it on her own. Today was day five of her breathing alone. The nasal cannula delivering the oxygen she needed looked sweet. I could see her face so much better.

She was balancing on that tight rope. She was clearly being held. We lived with more fear than I ever imagined possible. She was that little elephant.

When I asked my husband about this person who gifted us the poem I was even more stunned: “no, the person who had sent this to us did not know about our daughter.” Somebody must have sent it through him, I whispered. I have written this gentleman back, told him about Sarina. He reassured me:

“I did not know our story.”

When Sarina finally came home another two months later, I gifted the poem of the little elephant to all the nurses and doctors at the NICU. She had spent 183 days of her life there. A flood of cards and letters and little elephants made it into our life. Her primary doctor signed his letter “Dr. Babar”. She never called him by another name.  The elephant became Sarina’s token. The balancing act her way of life. And mine!

A year ago, another little elephant made it into my life. He graced a print in a magazine. I loved him immediately. I was fiercely attracted to how this happy little elephant was jumping through the air. Like the Dream Dancer!

He reminded me of Sarina. Sarina always the ambassador for courage and love. This is the happiness I am talking about, I thought. Happy against all obstacles. Choosing Happiness! Happiness is a Choice!,  is what I’ve learned on the rocky road of my life.

Two months ago I got ready to advertise for my new yoga classes. We had moved to Texas, and new challenges came with it.  I needed to promote myself again. I was disappointed with the few options I found. So I went to work. My belly on fire I knew I wanted to have something unique. Meaningful. Something “me.”

One more look through my pictures and my little elephant jumped right at me. Bliss! Smile! A few hours later I was done creating. Now he smiled right back at me from my business card. I kept my balance, I kept my trust!​

​My logo was born: 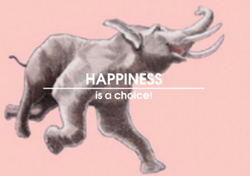 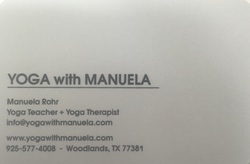 To be continued…Let’s see what magic happens next💗

Manuela Rohr is a writer and  Yoga teacher and Phoenix Rising Yoga therapist BDY/EYU, C-IAYT, PRYT. With roots in Germany, she now lives with her husband and daughter Rosa, CA.  She is the mother of a micro preemie girl and shares her healing journey in her blogs, books  and teachings. She believes everybody can practice yoga and offers her transformational Yoga and Mindfulness lessons in workshops and private sessions.

You have Successfully Subscribed!

You have Successfully Subscribed!